Composting Japan-style –Bokashi – is gathering fans here in New Zealand. Bokashi is an “everything-but-the-kitchen-sink” form of composting that works off a closed container (anaerobic) system that is fed with beneficial microorganisms.

It’s a traditional method of “fast composting” food waste – typically using a bran-molasses powder impregnated with a rich mix of beneficial microorganisms to sprinkle over your food waste and quickly (a few weeks) “brewing” it into compost.   It’s an anaerobic system in which the waste goes into a bucket or container with a sealable lid – as such, it is ideal for apartments and small properties that don’t have space for traditional compost systems.

The method, in various forms, has been used by Japanese farmers for centuries.  Food waste was covered with organism-rich soil and then, a few weeks later, the farmers would bury the mix which would continue turning into soil (you will need to do this too).

Today, most garden centres are doing a brisk trade in bokashi mix and bokashi kits.  Most homes, however, will have the parts of the kit, so the only essential to buy will often be the bokashi bran mix itself.

The microorganisms do the heavy lifting (they break down the food waste).

Over a period of days or weeks, you add a layer to food, then a fine layer of bokashi bran, then another layer of food, then another of bran, and so on.  It’s a good idea to push the layers down a little each time to improve the contact between the food waste and the bran.  Packing it down also removes air pockets (remember bokashi is anaerobic, so doesn’t want oxygen).

You’ll often notice white spots/white specks which are beneficial fungi working away and growing on the food.

The first phase is the bacteria breaking it down structurally but it can look quite similar to the day you put it in during the first couple of weeks.

It’s better if the mix isn’t too wet, so drain and use the “juice” on your plants every few days. 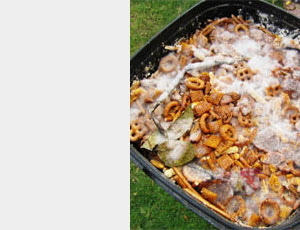